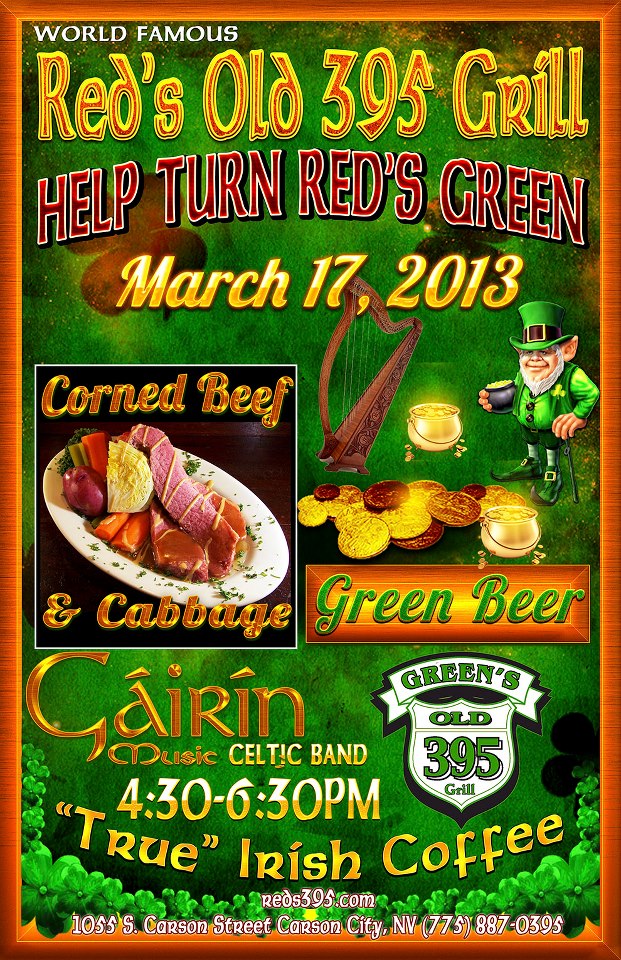 With St. Patrick's Day fast approaching, it's time to brush up on your knowledge of Irish music! Here's a lighthearted approach to Irish Musicology from the Carson City Irish American Music Duo of Gairin Music.

Everybody knows that a "jig" is a lively dance that originated in Ireland, and most folks associate the "jig" with cute mop headed girls bouncing up and down in their colorful costumes. As the girls seem to defy gravity with their legs bounding and arms straight at their sides, they dance in something called "triple time," which is sort of like a waltz gone wild! This is a style of dancing that originated among ordinary people, not the royal courts, since the royals were too busy being stately to have such fun leaping and bounding. And, when the dance is done, "the jig is up."

Without knowing it, many St. Patrick's Day revelers define this dance as they "stagger, lurch, or sway, as if from drunkenness" and hopefully allow their designated driver to do the driving instead of the reeling! This is one dance that was named for the way observers thought it actually looked. In Middle English, the meaning of the word was "to whirl about." How can you tell a jig from a reel? If you tap your foot to the music, you will notice that you are tapping in groups of 4 at at time. Reel has 4 letters in it. So that's how to remember a reel had groups of 4 foot taps and a jig has groups of 3. Confused yet? The Irish Gaelic word for that is "bunoscionn."

All sailors on wooden ships became expert hornpipe dancers, because they were actually required to participate in dancing as their only form of exercise during long sea voyages. Many a sailor would rather dance the hornpipe rather than walk the plank, which was their only alternative according to seaman lore! So, the hornpipe originated as a men's dance, and each man did his best improvisation of a sailor trying to stay afoot while the ship was rolling and lurching in the waves. Also, the instrument used to play a hornpipe was exactly that: a pipe made out of an animal horn. The Irish weren't the only people to play the hornpipe, and the hornpipe instrument was popular among Welsh, Basque, Scottish, Russian and other folks, too.

Everybody knows that a pub song is what you sing along to when you're in the bar and the Celtic band plays on St. Patrick's Day! However, to be truly knowledgeable of St. Patrick's Day musicology, one must know that a "pub" (not to be confused with "public housing") originated as a small local drinking establishment fundamental to the culture of Britain, Ireland, Australia and New Zealand. Especially in small villages, a pub was the focal point of the community, and one expert writing for Wikipedia asserts that there are approximately 53,500 public houses in the United Kingdom alone! The pub owner is known as the "landlord" and the patrons who enjoy each other's company and spirits there are the "regulars." And, that's no blarney!

Although not a legal holiday anywhere in the United States, St. Patrick's Day is celebrated everywhere on March 17th. It's become a celebration of Irish and Irish American culture, including prominent displays, "wearing of the green," feasting and consumption of alcohol (especially green beer), religious observances, and parades. The holiday has been celebrated all over North America since before the American Revolution. Of course it honors St. Patrick, the Patron Saint of Ireland, whose contributions were great and included overcoming his own slavery at the hands of "Niall of the Nine Hostages," introducing Catholicism to Ireland, the use of the Shamrock to explain theology, and some say he even ran the snakes out of Ireland.

About the author: Mary Kay Aufrance is a singer songwriter whose music is licensed through BMI. She performs Irish music with her husband Tom as Gairin Celtic Music. The two have 4 CDs and a book of Irish Music to their credit, available on Amazon, iTunes and other websites. Tom and Mary Kay have been singing and playing Irish music for decades, after outcasting themselves from their usual Renaissance festival circuit when Mary Kay took up the accordion (which was not invented until hundreds of years after the Renaissance). Now, they perform in local establishments, at county fairs and for traditional Celtic and American Folk Music societies.