"If John Harbison brought bees by ship to the west coast from Pennsylvania in 1850, he did not come through the Panama Canal. That wasn't completed until 1914! I suspect his shipboard travels took him around Cape Horn, after passing by Tierra del Fuego, or possibly through the Strait of Magellan, just north of Tierra del Fuego." -- Rob McArtor

We had to apologize for calling it the Panama Canal, because before the Canal there was a steamer route, a railroad and a trail before that. However, upon further investigation, we stumbled upon an account on the San Diego History website, stating, "Harbison wrote in his book, The The Beekeeper's Directory, that between October 1st, 1858, and April 1st, 1859, one thousand colonies of bees were shipped to California from the East Coast via the Isthmus of Panama.

For anybody interested in how folks got Out West in those days before the turn of the century, you can find interesting reading here:

Gold Rush includes a letter from a German woman who went "through the Panama Canal" before it was a canal. She tells about taking a train over a scary trestle, and she mentions that before the train there was a trail that she was glad not to have to take. One thing she liked doing on her trip Out West was dancing a polka to the music of the accordion on a ship between the Isthmus and San Francisco. For more history of The Panama Route see this book.

Meanwhile, the history of how honeybees came Out West has become a plot thicker than honey! We found out that even though John S. Harbison arrived in San Diego with one hundred and ten colonies of bees on in 1869, and then became largest producer of honey in the world, he was not the first to bring bees Out West. Thanks to sandiegohistory.org, we now know that, "Harbison has often been credited with bringing the first honeybees to California (the honeybee, Apis mellifera, is not a native of the Western Hemisphere but was imported by the early colonists from Europe), but this honor belongs to the botanist Christopher A. Shelton, who arrived in San Francisco aboard the steamship "Isthmus" on March 14, 1853, with twelve colonies of bees. He immediately took them to San Jose but only one hive survived. It did well, casting three swarms the first summer. Then, the next record of honeybees being brought Out West was that of William Buck, who brought thirty-six hives from New York via the Panama Route arriving November 30, 1855." Many thanks to Rob McArtor for giving us the incentive to go looking for more information about how beekeeping made its way Out West! For more about this topic, scroll down to view the original story.

Here's some
Music to Enjoy Honey by...
Listen to The Beekeeper's Dance... 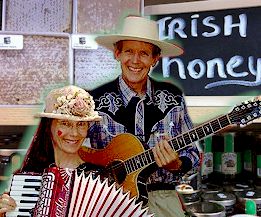 An original tune written by Mary Kay.
Click on the accordion (Requires JavaScript) 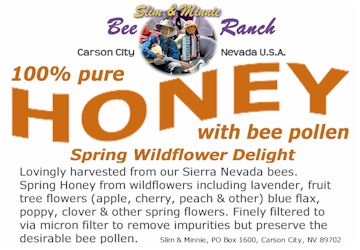 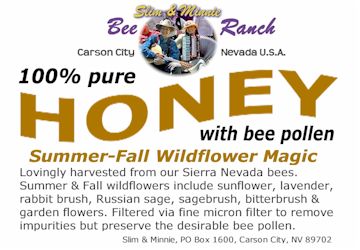 While we're on the topic of honey...
Here's some interesting history about
Celtic Connections, Old Time Cowboys and Beekeeping

According to the book Bee by Claire Preston those groovy iron age folks from Northern Scotland, the Picts, were making honey ale between 300 and 600 BC. The home brewing Picts thought the honey was collected by the bees after it was ready-made by the flowers! It wasn't until 1700 that people figured out that bees gather pollen from flowers and then make it into honey in their bee hives.

Scotland even has its own official bee census. The Scots started counting bees in 2010 to determine the effects of bee diseases that have Medieval sounding names like "foulbrood."

"Honeybees (Apis mellifera) are certainly indigenous to the British Isles, including Scotland. However it is likely that the Northern limit of their natural range is reached somewhere in the Northern half of the country, being determined by a subtle blend of factors such as rainfall, temperature and wind exposure. Fera colonies seem able to survive without human intervention certainly as far north as the coastal parts of Sutherland, but not much further. The Scottish Island groups - The Hebrides, Orkney and Shetland - are somewhat exposed and windy, but bees can be kept on all of them successfully, albeit with considerable help from the beekeeper. Queen rearing is rather more difficult in these areas." Thanks to beekeepingjobs.net for this info. 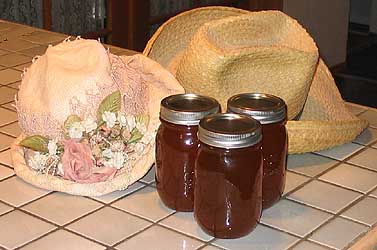 The Flight of Irish Bees

In Early Medieval Ireland, 400-1200 writer Dáibhí O 'Cróinín wrote that honey was utilized as a sweetener in brewing ale and also in butter. Yet, the Annals of Ulster in 993 recorded a "plague of people, animals and bees" across the land.

Bech Bretha (Bee Judgments) were written into ancient Brehon Law. Ownership of hives was to be clearly determined. There were laws against stealing hives, and even compensation required for those stung by another person's bees. Destruction of bees was a grave offense and a devastating tragedy, kind of like horse thievery.

The ancient monks were beekeepers, as were many common folks. Tracking a swarm of bees was one of the few activities the church allowed on Sundays!

How the Irish Got Their Honey

St. Patrick may have driven out the snakes, but Mo-Domnóc, a 7th century Irish saint was the guy who brought the first honeybees to Ireland. Old Mo had been beekeeping in a monastery in Wales, and when he returned to his native land, he brought some hitchhikers with him. Mo-Domnóc’s bees never returned to their former hives back in the Welsh monastery and they became the forerunners of all Irish bees today.

Some sources say that Mo-Domnóc was actually Welsh, not Irish. In that case, there may be at least one thing the Irish can thank the British for.

Saint Gobnait, a 5th or 6th century nun from County Clare is the Irish saint of beekeepers! Gobnait is Irish for Abigail, but she’s also known as Deborah (Honeybee). Thanks to Irishfireside.com for this Irish beekeeping history!

How Did Beekeepers Get Out West?

Not in a wagon train! During the 1850's Gold Rush, a descendant of Irish immigrants (who had come to the US before it was a country way back before 1776) John Harbison, made a killing when he brought beekeeping to the US West Coast from Pennsylvania. He didn't take the land route however, and instead he and his bee hives came Out West on a ship that floated its way through the Panama Canal. This is the same route and the same era when the first accordions came Out West, by the way! Harbison's is avery interesting story. 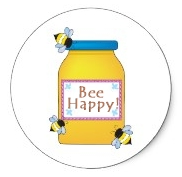